Defending Your Church in a Hostile Environment – Part 1

On September 17, 2016 I had the privilege of being part of a symposium held at the National Constitution Center and sponsored by First Amendment Voice as part of the celebration of Constitution Day. This happened to be the 229th Anniversary of the final signing of the Constitution. I was part of a panel and the topic that I spoke on was Defending Your Church in a Hostile Environment.

What is the Threat? 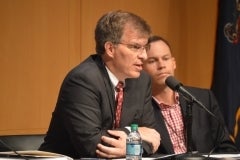 Think about this – What would happen at your church if you or the Pastor of your church:

Much attention was paid this summer to the Supreme Court's Same-Sex Marriage decision in Obergfell v. Hodges. However, the greatest threat to church ministry existed before this decision in the nature of sexual orientation, gender identity laws (SOGI). SOGI's make it illegal to treat people differently or discriminate on the basis of sexual orientation or gender identity.

What Are the Effects of SOGIs?

SOGIs affect businesses that are open to the public or that serve the public in any way (public accommodations). For some examples of businesses affected by SOGIs see:

Nondiscrimination laws tell employers what criteria they may not legally use in making hiring and firing or promotion decisions. When you add a SOGI to these employment nondiscrimination laws, you infringe on the freedom of religious organizations to employ only those persons who best advance their mission and message.

What does it mean in practical terms to prohibit businesses and public places from treating people differently based on gender identity? In jurisdictions with SOGI laws, women and girls will share public restrooms, shower facilities, and locker rooms with biological men who “identify” as women. This makes it easier for sexual predators to access their victims:

The attacks that we are seeing on faith based organizations are progressive and have begun on faith based businesses. It will not be long before the attacks move on to Christian ministries (schools, pregnancy centers, counseling centers, faith-based homeless shelters) and then to churches. If you think that churches will never be faced with having to comply with SOGIs:

These threats are real and happening. Even though these Public Accommodation laws make reference to churches, there is no reason to believe they will be limited to churches. Rather all religious organizations, whether they are Christian, Jewish Muslim, etc. are at risk by these laws which seek to intrude and restrict as much as possible religious liberty and worship.

Under current law, churches are exempt from SOGI laws because they are still considered private places. However, as I mentioned, at least 2 states interpret their SOGI laws to apply to churches in some instances. Churches still enjoy robust First Amendment religious liberty protection, especially as it pertains to internal governance and doctrine. We cannot assume, however, that those protections will stand indefinitely. Churches need to act now to strengthen their religious liberty protections and to protect their freedom to operate according to their faith.

In Part-2 of this Blog Post I will talk about what a church can do to protect itself.

Note – Some of the material for this post was taken from a presentation given by the Alliance Defending Freedom.