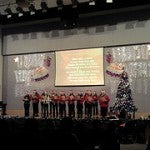 In case you haven't noticed, Christmas season is approaching fast.  For those of you with children in school, this mean that your kids may be participating in band and choral concerts. One question that often comes up this time of year is whether a public school can include religious, and in particular Christmas, songs in their concerts.  The answer to the question is that they absolutely can.

Matthew Sharp, an attorney with the Alliance Defending Freedom addressed this issue in a letter to a New Jersey School District.  Mr. Sharp stated:

“Schools should not have to think twice about whether they can allow students to perform Christmas carols,” said Legal Counsel Matthew Sharp. “Courts have unanimously upheld their inclusion in school productions–even when songs deal with Christian themes that are naturally a part of the holiday.”

One thing to be aware of, though, is that the law does not require that Christmas songs be included.  It only says that there is no prohibition on them being part of the performance.

Many School Districts believe that it somehow is a violation of the Constitution to include Christmas songs in their seasonal performances.  As Mr. Sharp's letter clearly shows, this is not the case.  It is important to educate the leadership within the School District and, importantly, the choir and band directors who choose the music, that they can include Christmas songs in their holiday shows.